I’ve been interning at Sun Microsystems in Delhi from May 1st and during this period, I’ve had the opportunity to research a variety of open source applications. My initial project was to explore and research various open source applications suitable for use by students and compare them against each other and with the proprietary alternatives. There are indeed a bunch of alternatives available for the software we use during the course of our day to day work.

I managed to submit a paper on “Components of an Open Source Operating System for Sustainable ICT Education in Schools in Developing Countries” to the HICSS conference, and I’m starting off a multi part post with my learnings on open source software and development.

One of the interesting works that I read on open source development was Eric Raymond’s “The Cathedral and The Bazaar”. This is probably one of the definitive works on open source development, and a number of theories stem from it. In fact, quite a few papers that I referred to during the course of my research cited this work. He has postulated the following principles in the essay:

Most of his principles are for software development in general, and so also apply to open source development. The key learnings form his essay are two-fold. First is that it is important to have a working prototype of the project before making it open source, or at least trying to find other developers who’d be interested in it. Second is that open source attracts a wide variety of talent that can be put to various uses, ranging from bug finding, to improvement suggestions to actual coding. Thus, it is essential to treat the participants in the right manner as everyone could make an important contribution.

One of the other observations to be made about open source development is the vital role that the internet has played in creating the synergy that exists between the developers, users and other contributors of any open source project. In fact, Eric Raymond has said as much in his essay:

… Another (in hindsight) was that the Internet wasn’t yet good enough.

Before cheap Internet, there were some geographically compact communities where the culture encouraged Weinberg’s “egoless” programming, and a developer could easily attract a lot of skilled kibitzers and co-developers. Bell Labs, the MIT AI and LCS labs, UC Berkeley—these became the home of innovations that are legendary and still potent.

Linux was the first project for which a conscious and successful effort to use the entire world as its talent pool was made. I don’t think it’s a coincidence that the gestation period of Linux coincided with the birth of the World Wide Web, and that Linux left its infancy during the same period in 1993–1994 that saw the takeoff of the ISP industry and the explosion of mainstream interest in the Internet. Linus was the first person who learned how to play by the new rules that pervasive Internet access made possible.

In essence, open source development has a lot of potential when used in the right manner. In fact, many companies use it quite strategically and couple them with interesting licenses (I’ll cover licenses in another part). There are also quite a few organizations championing free (as in freedom) software with the FSF (Free Software Foundation), headed by Richard Stallman being one of the pioneers. There is also a bit of controversy in the Free/Open Source world with some preferring the term free to open source. This has however not deterred organizations from leveraging open source development strategically. Open source development may not be practicable in every situation, particularly for routine software development in enterprises, but it definitely has its merits and I’ll be looking at other aspects of open source software in subsequent parts.

I’m two weeks (out of eight) into my internship with Sun Microsystems in Delhi, and have been using OpenOffice almost exclusively to create & edit documents during this period. Initially I had installed version 3.0 & last week upgraded to the latest 3.1 version. Feature wise, OpenOffice seems to be quite a useful alternative to MS Office, though it is not entirely compatible with the Office 2007 formats, particularly pptx.

There have  been a couple of features that I found lacking in the OpenOffice writer. The first was the lack of a proper citation/reference management tool like in Word 2007. The database based feature seemed a bit too complicated. As I was looking around on the OpenOffice wiki, I found a nifty Firefox based utility called Zotero. It allows the collection of reference sources on Firefox & these can later be inserted as references in Writer. It supports a number of citation formats & also allows one to insert a bibliography section that is synced with the main Firefox reference database. There is also a plugin for MS Word in addition to some other word processors. There seems to be one limitation with the reference tool though – it does not support inserting references in tables. Still, it is quite a useful tool to have.

And, talking of tables in OpenOffice Writer, there is a feature turned on by default that seems to be more irritating than handy. This is the auto number formatting in table cells along the lines of a spreadsheet. I found this to be quite a problem when typing in numbers with decimal points (entering “3.0” would get converted to “3”) or date like numbers/phrases that got converted to a different format. This feature while quite handy in a spreadsheet caused me quite a lot of problems initially before I turned it off. Turning it off is quite simple. Just go to Tools->Options->OpenOffice.org Writer->Table and uncheck the “Number recognition” feature (I could have probably just unchecked the “Number format recognition”). I did the same under the OpenOffice.org Writer/Web section too, to be on the safer side. 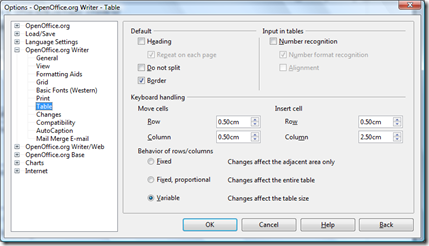